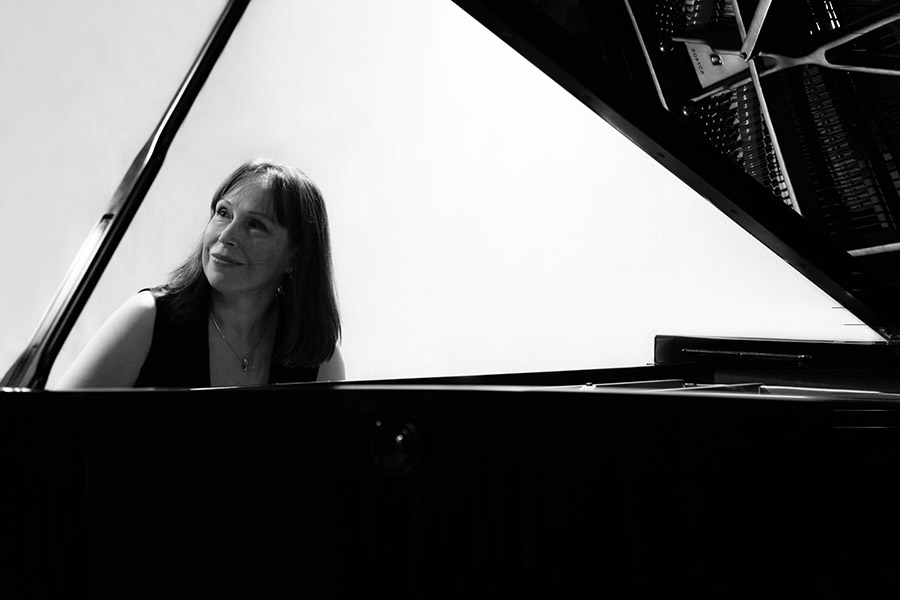 Marina Samson-Primachenko was born in Leningrad what is now St. Petersburg, Russia. She started to play piano at the age of three with her mother, herself a professional pianist. A prodigious child talent, she made her first public appearance at the age of four from which time she studied with Elena Gougel, the noted Russian teacher and pupil of the famous Heinrich Neuhaus. At seven she entered the Special School for Gifted Children (affiliated to the St. Petersburg High Conservatory) and began to appear regularly in local concert venues as a “child prodigy”. This School for gifted children has produced such artists as Daniil Shafran, Mischa Maisky, Gidon Kremer, Maris Jansons, Grigory Sokolov, and many others.

When she was fourteen, she won the First Prize at the “St.Petersburg Young Virtuoso Competition” playing Rachmaninov’s First Piano Concerto (in its original version), marking her debut performance in the city’s Philharmonic Hall.

On the completion of her academic studies, she entered the St. Petersburg (Rimsky-Korsakov) High Conservatory, studying in the class of Galina Fedorova (solo piano), Felicia Fondaminskaya, Elena Shafran (chamber music) and Sofia Vakman (accompanist). She graduated with an “excellent” mention in all disciplines.

She then pursued further courses in Moscow with Lyubov Timofeyeva (pupil of Yakov Zak) and Boris Petruschansky (graduate of Lev Naoumov and Heinrich Neuhaus), currently Professor at the Imola Piano Academy in Italy.
She then moved to Czechoslovakia where she pursued her artistic and pedagogic career.

Based in France since 1993, where her maternal ancestors came from, Marina Samson-Primachenko has given numerous solo recitals, performed concerto with orchestra and participated in chamber music. In 1994, she obtained the “Grand Prix” of the Pierre Lantier International Competition in Paris. She plays in England, Germany, Czech Republic, Switzerland, Hungary, Italy and France.

She pursued her teaching activities at the “Schola Cantorum” in Paris, gives master-classes to young pianists all over Europe and is a jury member in many international competitions.

Besides her large repertoire (Bach, Haydn, Mozart, Schubert, Weber, Schumann, Chopin, Rachmaninov, Prokofiev, Shostakovich, Debussy, Ravel), Marina Samson-Primachenko loves to promote some rather unknown musicians such as, Fanny Mendelssohn, Martinu, Medtner, Weinberg, Boris Pasternak (the 1958 literature Nobel Price). For the latter, she has used the original manuscripts with the permission and encouragements of Pasternak’s son.